Part Four - Disorder and Me

I think the most challenging part about giving up drugs and alcohol was having to get to know myself. The good, the bad and the downright ugly. Alcohol and drugs had become a crutch for me in many areas of my life. If I had a bad day at work, I turned to it. If I had a fight with my boyfriend, I turned to it. If it was Wednesday, I turned to it. It had become a comfort in my life that seemingly made everything better. Although, nothing ever got better. It only ever made the situation worse or caused me to feel utterly hopeless. So, when you’ve created this warped sense of security, what do you do when things go wrong and there is nothing to help numb the pain? Well for me, I put my trust in Jesus and I began to get to know the real Kerryn behind the mask…

As we grow up, there are circles of influence around us that we draw from and take with us into our adult lives. As I have grown, I have loved and been heartbroken, shared and had trust betrayed, hurt and been hurt, which added to the influences of my past and formed a huge part of my character as an adult.

When my father left my mother, she was heartbroken and as a child, I could not understand what that was like for her. I didn’t know a lot of things about their separation until I was old enough to understand them. But at the age of six, I certainly didn’t know what heartbreak looked like. My mother did and said things that she probably shouldn’t have to ease her own pain and while both of my parents had a responsibility to try and keep us kids out of their divorce, it was impossible.

Having suffered through the debilitating pain of heartbreak myself, it is a wonder how a woman with four young children was able to go on without locking the door and sticking her head into a pillow. But she kept kicking, even though her head was just clear of the water’s surface. Over time, my mother’s heart began to heal and she moved on with a new partner. As a young adult, I blamed my mother for all the pain we experienced as children. I questioned her stableness as a decision maker and wondered why no one ever stepped in? I pointed the finger at her for all the hardship we faced growing up and felt bitterly towards her for not being like ‘other moms’.

But as a somewhat more mature adult looking back, with the knowledge I now have around mental health, I can see how hard it must have been and my heart genuinely feels the pain of her heartbreak. It was the responsibility of her children that kept her going and although she made mistakes, her fight was to give us the best she possibly could, the best way she knew how.

Why am I sharing this you may be wondering? Because I wanted to share a little bit about my own experience with disordered eating and raise attention to how the unintentional words of an emotionally torn woman, inevitably moulded the characteristics of a woman. With all that was going on, my mother told me that my father had left us because she got ‘fat’ which painted a picture in my mind at that age that the body was the most important factor of any relationship.

It wasn’t until I was older that I realised the impact these words had had on my subconscious. I suffered day to day with severe body dysmorphia. When I was being bullied in school, I put it down to my weight. I blamed myself because I was ‘fat’. When all my friends had boyfriends and I didn’t, it was because I was ‘fat’. I hated looking at photos of myself, I hated going shopping for clothes, I just hated everything about who I was. Often the thought of how I looked would completely debilitate me from leaving the house.

Dating became something I dreaded because I would become so fixated on trying to watch what I ate and could hardly focus on anything else. The realisation of how badly I viewed myself really hit me when I was looking through photos from when I was addicted to drugs. And remembering that even in that time, I absolutely hated my body. Removing drugs from my life made things worse for my weight as I ballooned in size and in my relapses, I often contemplated giving up the fight to quit so that I could lose some weight… Don’t even…

When I met George (my now Husband), I was suffering inside so badly. Constantly comparing myself to other women, wondering what on earth he saw in me when there were all these other beautiful women out there. When he asked me to marry him I couldn’t believe it and I could not have been happier! In that moment, there was not another thought in my mind other than excitement! But sadly, as I looked through the photos afterwards, I pulled myself to pieces. I’m so fat, I wish I had put makeup on, my hair was a mess, my double chin, my dress looked frumpy etc etc...

As our relationship grew, I started to acknowledge more and more that I had a problem. I started to recognise the effects of my negative thinking but I just couldn’t break free from the daily patterns I had developed. I lost myself in the planning of the wedding and for a few months I didn’t even have time to stop and think about how I looked. For a minute, I thought I was making great progress and that once George and I were married, the thoughts would go away completely. Sadly, they did not. In fact, they got a lot, lot worse. And suddenly, there it was…. ‘If I get fat, he will leave me’. This thought was more real to me now than it had ever been. I was married. And the idea of losing my best friend was overwhelming.

For a long time, I suffered in this head space in silence. It was bad. All day every day I thought about how I looked and how disgusting I was. If I ate bad food, I binged on it and then made myself sick in a bid to keep the weight off (not realising that doing that wreaks havoc with your system and doesn’t help you keep weight off at all) all while striving to be the best damn housewife that ever lived with three homemade meals a day as well as all the baked goods you can imagine. If I couldn’t get to a bathroom unnoticed after a binge, I would go into a mental meltdown. Panic would overtake my body and my thoughts. It wouldn’t matter what was happening around me, all I could think about was that I couldn’t get it out. My mind was a very disordered, all-consuming place to live in.

One day, while I was sitting at my desk at work, I crashed. My thoughts were completely irrational and out of my control and as I stared into a photo I had pinned up of George and I on our Wedding day, I thought to myself that I wish he didn’t love me so much so I could end all the noise in my head. I’m not sure what it was in that moment that pulled me back to reality, his love, God’s love? But the thought made me realise that I was sinking deep… and fast.

I stopped and prayed that very second that if God saw fit, He would make a way for me. I had already been considering a health retreat where a close friend had done a depression recovery program and had amazing results and I prayed that if it was at all possible for me to go, that we would somehow be able to afford the costs. Now this is not a joke, within about half an hour I received an email from my boss to say that we would be getting a staff bonus! I couldn’t contain myself, I rang the health retreat straight away and asked what their five-day program would cost and she said that if paid up front there would be a discount which meant the cost came to $12 less than the bonus. Praise the Lord.

My time at Highwood Health Retreat was invaluable. I remember speaking with a lady about my what would happen if I overate and she ever so gently put her hands on my face, looked me in the eye and said, ‘you’re not going to do that anymore.’ And I just knew in that moment, that it was the beginning of a healing process for me. I finished my five days at Highwood and when I got back to Geelong I got in touch with Headspace who put me in touch with Beyond Blue who organised for me to be put onto a Cognitive Behavioural Therapy Counselling Program.

It wasn't long before I began to recognise my thought patterns and realised how the effects of my parents divorce had effected me. I absolutely do not blame either of them, but recognising how I viewed myself and putting the dots together was inevitably what helped me to break free from the cage I had been living in. It didn't happen overnight though, I had setbacks, I had to learn to be patient with myself, I had to fight and wrestle with my thoughts daily until I was able to change my thought patterns. I still have moments now when I find myself focusing too much on my body and what it's 'not looking like' but I am reminded that my body is not all that I have to offer this world.

Admitting that there is a problem and asking for help can feel like the scariest moment in time, but freedom is more powerful than fear...

Enough is Enough - How COVID19 forced me to get Naked with myself.

Diary of a Hangry Hippo 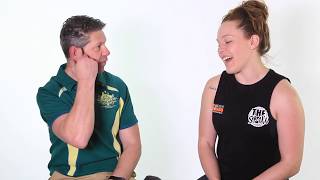 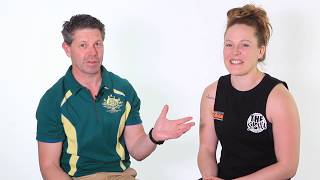 Part Four - Disorder and Me

Part Three - Life Down Under